AirTags are a popular location-tracking Bluetooth device that helps you track and find all of your misplaced stuff.

If you’re looking to buy an AirTag, one question you might be wondering is, do AirTags come with a USB cable? If you’re wondering the same, then read on because this article is for you.

AirTags do not come with a USB cable out of the box. An AirTag’s connectivity method to other Apple devices is through Bluetooth.

In this article, I explore topics such as do you need a USB cable for an AirTag, what you get in an AirTag box, and much more.

Do You Need A USB Cable For An AirTag?

There is no need or way to use a USB cable with an AirTag. In order to connect to an AirTag you must use Bluetooth rather than a hard wire.

AirTags rely on Bluetooth to communicate with other Apple devices. When setting up an AirTag for the first time, you must establish a Bluetooth connection to complete the process.

What Do You Get In An AirTag Box?

In an AirTag box, you get the AirTag itself with a pre-installed, unactivated CR2032 battery, some safety and handling information, and a handy AirTag user guide, and that’s it.

For those wondering if AirTags come with a USB cable or a USB-C cable, they do not. Nor do they come with an AirTag holder, an AirTag keyring, or an extra AirTag battery out of the box. Apple has built a market for AirTag accessories to keep your AirTag safely secured to your stuff.

Once you open the usual Apple-style packaging, you’ll find a couple of documents, a user guide, and safety and handling information.

Putting those documents to one side, you will find the AirTag, all nicely wrapped in plastic. Removing the plastic serves two purposes, the first, it exposes the stainless steel face, and the second, it activates the pre-installed battery.

Do you need a charger for an AirTag?

You do not need a charger for an AirTag.

How far does Bluetooth on an AirTag work?

According to Apple, an AirTag must be within about 33 feet (10 meters) of an Apple device for Bluetooth to work.

Can your replace an AirTag battery?

An AirTag’s battery can be easily replaced.

Final Thoughts On Do AirTags Come With A USB Cable

So, In conclusion, do AirTags come with a USB cable? No. AirTags do not need a USB cable. The good news is that an AirTag uses Bluetooth to connect with other Apple devices.

Additionally, an AirTag’s battery will last around one year before it has to be replaced by the user, so there is no need to charge an AirTag with a charger. 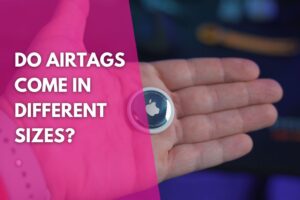