Are you considering buying an Apple AirTag to track your stuff, like keys, bags, wallets, and other items? One common question often asked is, do AirTags come with a keychain? If you’re wondering the same, then this article is for you!

Apple AirTags do not come with a keychain out of the box. There is, however, a wide selection of AirTag keychains available from both Apple and third-party companies that you can buy.

In this article, I dig into topics such as what is an AirTag keychain, do you need a keychain for AirTags, and much more.

What Is An AirTag Keychain?

An AirTag keychain secures an AirTag in place and allows you to attach the AirTag to an item you want to track.

When you purchase an Apple AirTag, it does not include an AirTag keychain, AirTag holder, nor any other Apple accessory for that matter. Therefore, if you want to attach an AirTag to anything, you’ll have to purchase one of the many AirTag keychain accessories.

Apple offers two styles of AirTag keychains. Apple’s best seller is its high-quality leather keychain. Thoughtfully crafted from the finest materials, the leather keychain has a stainless steel ring that is as striking as it is strong, while the European leather is specially tanned and soft to the touch.

The second keychain offered by Apple is a polyurethane loop. This lightweight and durable keychain securely fastens your AirTag to your stuff and fits tightly around your AirTag to ensure that it stays put.

Do You Need A Keychain For AirTags?

To start using an AirTag, you don’t need a keychain. A keychain is only used to secure an AirTag to an item you want to track, like keys for example.

It’s not necessary to use any keychain with your AirTag. In some situations, simply tossing the AirTag into a bag or a pocket will be perfectly suitable.

What Comes With AirTags?

In a newly purchased AirTag box you will find the AirTag itself, a CR2032 3V battery, an AirTag user guide and battery safety documentation.

An AirTag does not come in a protective case, however, it does come wrapped in plastic to protect it since the stainless steel face does scratch easily. When the plastic is removed it also activates the removable battery enabling you to pair the AirTag. You will also hear the AirTag chirp once it’s activated and ready to pair.

What Do You Attach An AirTag To?

AirTags are extremely flexible and can be used to track many different things. Below I offer up some of the most popular uses for AirTags. If you’re looking for a list of AirTag uses, check out my other article, where I go into more detail.

What size is an AirTag?

What weight is an AirTag?

What height is an AirTag?

Final Thoughts On Do AirTags Come With A Keychain 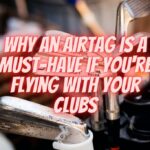